The Lady in Black 2 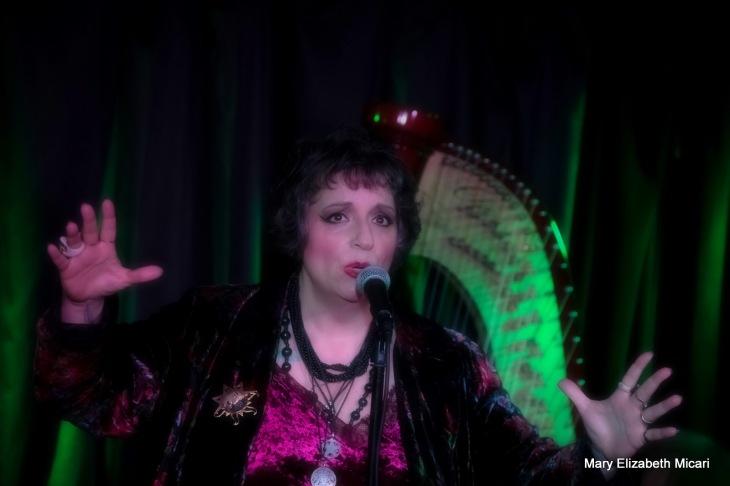 The 1990s were a period of upheaval in the life of performance artist Mary Elizabeth Micari. Her marriage was breaking up and she was discovering her true inner self as a Wiccan—a witch. Helping her through this life crisis were two things: the alt-rock songs of disconnection and angst she heard on the radio, including songs by Alanis Morrissette, Tori Amos, Phil Collins and other nineties mainstays—and her diary.

Micari has combined those two supports into The Lady in Black 2, a cabaret show-cum-confessional that premiered Oct. 26 at Pangea in New York City. She relates breathless (and sometimes breathy) accounts of learning how to cast spells, visiting an upscale witch store on the West Side, watching her marriage erode, and conquering her first Witches Ball, all read directly from the red-bookmarked text of her actual diary. In between these autobiographical sketches, Micari closes her eyes, leans back her head, spreads her fingers on upraised hands, and growls her way through Amos’ “Hey Jupiter,” or Elton John’s “The One,” or Sting’s “Sister Moon.” 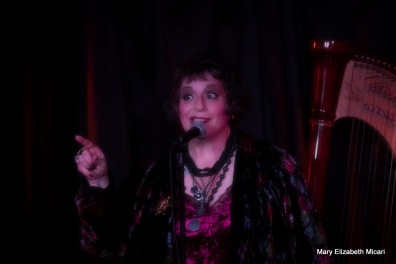 When switching gears in this, her Halloween-timed bildungsroman, Micari cares enough to warn the audience, “Things get a little more serious, guys, buckle up.”

In The Lady in Black 2 Micari confides in the audience like a friend, with stories that are sometimes deep emo, sometime joyful. MAC Award winning musical director Tracy Stark, makes her three-piece band somehow sound like all the most interesting musicians of that musically complex decade.

Seen previously at Pangea in I’m SOOOO High: Rev. Mary’s Reefer Revue, Micari gets down to brass tacks in this latest installment of her autobiographical musical odyssey.

The Lady in Black 2  played a single performance Oct. 26, 2019 at Pangea, the cabaret club at 178 Second Avenue in Manhattan.

By Natasha Dawsen, Editor in Uncategorized on October 30, 2019.
← Robert Viagas and Shelter in Place Phil Paradis and the End of the World … as we know it. →