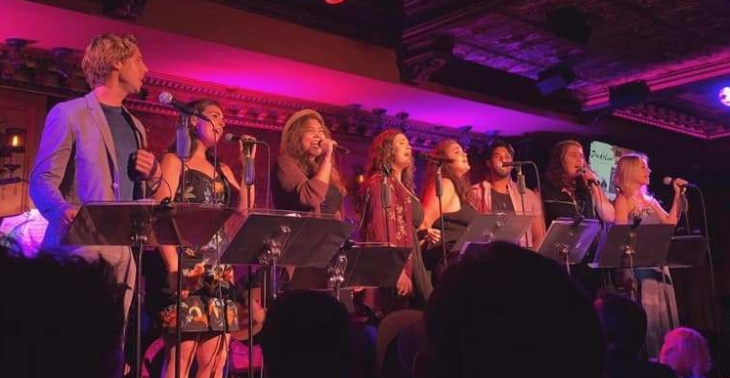 Jane’s mom (Colleen Francis, also the show’s composer-lyricist) has multiple unhealthy issues. She is mentally ill and alcoholic, and she has a contentious relationship with her ex, Jane’s dad. The mom is needy and dependent and, while there is a part of her that understands it is Jane’s time to head off to college and start her own life, she also oppresses Jane with guilt to remain her perpetual caretaker. Jane is torn.

As presented in its truncated form at 54 Below, this lite foray into Next to Normal territory displays a great deal of promise but still needs sharpening, focus and, above all, its own distinctive voice.

In addition to a performance that paints heartbreakingly vivid picture of the mom’s struggles, Francis has composed a musically diverse score that shows her skill at soul, folk, gospel, and above all, country. The choice of style often seems arbitrary, however. A lot of the songs play like pop rather than theatre songs: the character is at the same place at the end of the song as at the beginning.

The best songs reflect the various conflicts of the story. “Get Your Shit Together” is a snarling fight song between the mother and her ex (Adam James King). Jane and her BFF Gabbie (the funny and endearing Lillie Ricciardi) contemplate the non-academic joys of college life in “North.” “Stay” is the mother’s cri de coeur.

To dramatize the conflict within the mom’s head, Dandelion uses an Inside Out-style quartet to voice her Depression (Allison Sike), Control (Miranda Lane), Rage (Brianne Wylie) and Paranoia (Adam James King). At least that’s what it says in the program. They are not as well defined in actual performance, and seem just like a regular chorus. Much more can be done here to make the show interesting and special.

Because Jessica Francis Fichter and Sean Riehm’s libretto was presented in highly condensed form in the showcase, we also didn’t get to see the character development of the brother, Jordan (Brenden McDonald), who is introduced as not caring about his mother with a funny country song (“Sucks to Suck”) but makes an abrupt transition in Act II. Also, as presented, the story starts promisingly, then goes around in circles for a while as Jane decides to go to college, then decides to stay home with her mother, then college again, then mother again, etc. However the issue is settled in a very satisfying way that was skillfully set up in the first moment of the show.

There is a lot here. The writers should keep striving to find that voice and make it sing out.

Directed by librettist Jessica Francis Fichter, with music direction by Neveda Lozano, Dandelion: An Original Musical played a single performance at 54 Below in Manhattan on August 14, 2019.

By Natasha Dawsen, Editor in Uncategorized on August 19, 2019.
← THIS Mr. Rogers’ Neighborhood is far darker Robert Viagas goes BACK →