The all-female cast centers on Asian-American, Tara Cornfeld, and her attempt to decrease her job-related stress by delving into spiritualism. Divination – through Palumbo’s trademark intellectual humor and clever plot twists – examines the individual crossroads in each of the women’s lives. Their individual journeys all beginning at a ritual at an old crystal shop and continuing to that point in their lives when they must leave the past behind and not care about the future. They must enjoy – even worship – the present.

Dorian is a writer here at Five Star so we’re extra thrilled to sit with her and discuss her many talents.

We know you’re a journalist, now, tell us about yourself as an artist

The stuff I write is always pretty character driven. Characters navigating an emotional landscape, trying to find their place in the picture. To contribute a verse to the universal poem, if I can paraphrase Walt Whitman for a hot second.

I started out writing for film mostly, but I got so tired of almost making the film, almost selling the script, almost almost almost, you know? And the words would never be said by an actor, and the actor would never bring the story to the audience, and the work would never come to fruition – it would just sit in a drawer and cry its little ass to sleep every night. So I started back doing what I did in college, which was writing for theatre. The work we do in theatre might only reach a few hundred folks, but a story gets told, and people respond, so everyone gets a complete experience. Hopefully a meaningful one.

Share with us a little something about your play that we WON’T see in the press release.

That I wrote the character of Geri with Scottish Actress Michelle Gomez in mind. Michelle is an amazing Scottish actress who recently guest-starred on Doctor Who as a Time Lord called “Missy” and I would totally nerd out to infinity if she actually played the role someday.

Considering the trajectory of organized religion as opposed to spirituality, how does your play resonate today? Feel free to be blunt.

People are feeling very dis-empowered. They really yearn to connect with each other, and sometimes that leads them all the way back to occult studies and psychic phenomenon – because they want the world to make sense. They want to find some kind of rhythm of life they can dance to again. Maybe they think traditional organized religion is nonsense and the patriarchy is a horror show, so, hell, let’s get together in each other’s basements and try to cast some spells or tune into that collective unconscious that Mr. Jung was always jazzing about, or just watch the Long Island Medium together and eat Twix bars and cry. The world sucks right now, man – but we’ve got each other.

What influenced your choice of director? Did you have a strong say as to the casting?

I’ve been insanely lucky in my career so far working with some really talented directors. I even got to work with Rebecca Taichman years ago on my play “Carnegie Hill” when it was being work-shopped. Rebecca’s a real force of nature. I was so sad that the project couldn’t get funded.

I brought “Divination” to Ken Coughlin because I so admired Ken’s work as an actor and director, and he had a lot of experience in the world of independent theatre as actor, director and as producer. He’s got this very pragmatic vibe about him that’s really valuable when you’re working in the arts. He understands that the creative imagination has to be a balloon, it has to fly, but the balloon needs a string, and the string needs to be held, or else the experience of the balloon isn’t going to really happen.

Where do you see it going in the future? What’s the next step?

This staged reading of “Divination” at the Dramatists Guild is so industry folks will be coming over to give it a listen, and then after that we start raising some money to get it on its feet here in New York. It’s a small cast of six women, takes place in the present day, and has just the one set, so thank God the budget on this one isn’t going to kill anybody. 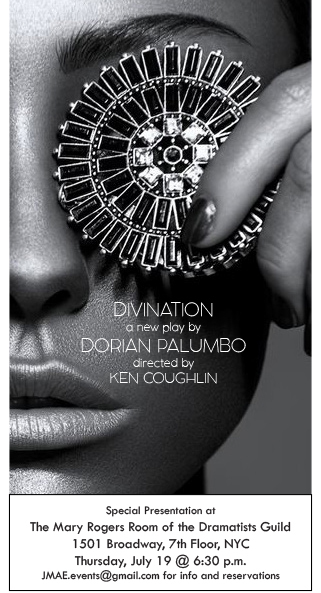 Well, you don’t have to believe in psychic phenomena, or mediums, or energy work, or anything like that to come by and enjoy a little comedy/drama that explores that subject. But I’d really like for people to come away from “Divination” wondering if there really is much, much more to a human being than what surgeons can remove. Yes, I’m quoting “On a Clear Day” now. But, seriously, I’ve yet to meet someone who has never in their lives had any kind of a psychic experience of some sort or other. If we’re all having those experiences, then isn’t it natural to ask why?